The Mountain Engine allows the dynamic creation of a two dimensional mountain with physics models and its manipulation at runtime.

My game “Sapples” allows the player to manipulate the shape of the mountains as well as to create his own mountains within the Mountain Editor. Also the physics model of the mountain will be calculated in manner that objects can be placed on it or fall down in a physically correct way.
2D physics engines unfortunately process only convex polygons with a low number of vertices. However a two dimensional mountain is composed from a lot of vertices and can also contain concave polygons (i.e. overhangs) – so a special solution was mandatory. 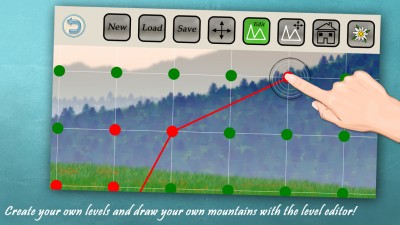 Therefore I developed the Mountain Engine, which allows the dynamic creation and graphical representation of two dimensional mountains, containing a lot of vertices and also concave polygons. Complex and concave polygons are split to simple convex polygons, which then are passed onto the physics engine.

The Mountain Engine also contains the easy-to-use Mountain Editor, which is included in the game “Sapples”, allowing everybody to draw its own mountain with correct physics models and in very short time.

Another element of the Mountain Engine is the bidirectional multilevel parallax scrolling, which allows a beautiful height-altitude effect in real 2D when reaching the highest parts of the mountain.